Ava goes first because she’s pithy and because there’s a new study that says women of color get short shrift on Twitter, and I quoted a shitload of white guys lower down in the round-up.

You don’t even have to know the specific thing she’s quote-tweeting. This is just the feeling after G-20. 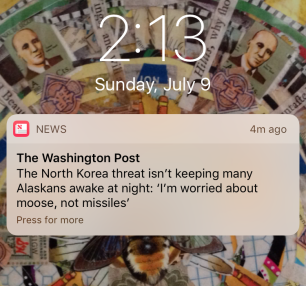 When what they SHOULD be worrying about is the bears.

This morning I was so worried right off the bat by tweets/headlines that I examined how much of my three-year plan was completely dependent on living in a free society. I was thinking about things like net neutrality, health care, death of middle class, and cultural crackdown on media and the arts. None of it felt outlandish or alarmist. Basically my three-year plan is completely pointless, undoable, unsafe, and foolish in Trump’s America. So I’ll keep checking in with that. It’s not giving up, it’s not personal, it’s just knowing the environment you’re working in. In the meantime, I did my first writing assignment for a political essay class I just started. 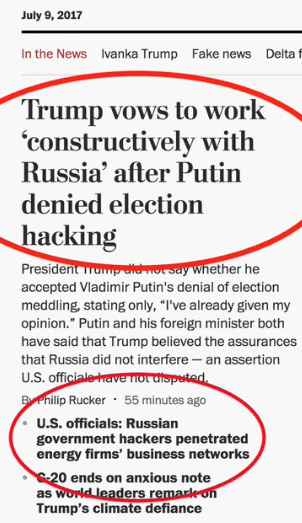 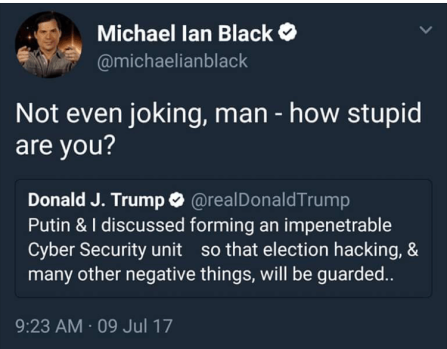 But then there’s the rest of the Republicans.

When the backdrop is so grim, anything that makes you feel like you’re not crazy is reassuring, even if it’s bad news. Any bad news that feels like it will push through to a breaking point that leads to airing out and sanity — that’s welcome. It’s a push toward honesty and having things out on the table. Knowing what we’re dealing with. Someday agreeing on basic facts again.

So that was this today: 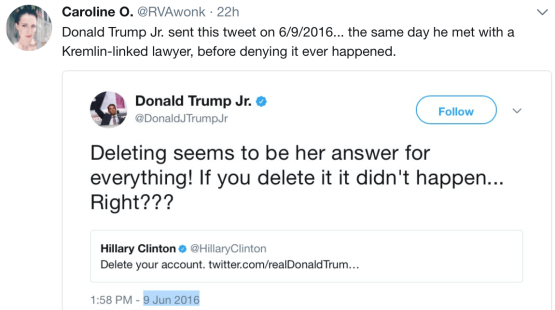 Poor Mosul has been through such hell, but there is this:

And the Trumpsters can’t stop this country from becoming more Latin American and more Latin influenced. Not yet anyway. Song of the summer.

McCain could be exaggerating to lull everyone into a false sense of security, but:

Last word, from this gent:

Whoa, everything is flooding past quickly. I had a lot more to add to yesterday but time is sweeping on and today was Comey Day.

I wish I didn’t have to be at work all day, and I could have live-blogged my impressions as I listened to the hearing at my desk. That would be much more fun and immediate. Now it’s late, and the day has been too much of an emotional journey already, and I’m tired of it all.

Also, after Comey, I was infuriated by the right wing spin and the fact that the GOP is allowing Trump to do whatever he wants without oversight. And I was let down, because briefly, Comey’s testimony had been comforting and refreshing. He said that the Trump administration lies. He said he was afraid Trump would lie about their encounters. It felt good to hear someone say that. At the end of his testimony, the Republican Senator Richard Burr made it sound like he believed Comey over Trump. And when Comey said we should all feel good about Robert Mueller being in charge of the investigation — I was so relieved that someone told me I could feel good about something. And that I sort of believed it for a second.

But the Comey hearing also felt like a bunch of guys questioning a rape victim, listening to the questions the Senators asked and how they asked them. And just knowing the awkwardness and imbalance of power in the room when Comey was alone with Trump. And knowing Trump doesn’t respect people’s autonomy and is a sexual predator. It was stomach-turning.

After the hearing I listened to Ezra Klein’s conversation with Masha Gessen in which she talks about how the left is just turning into conspiracy theorists and the Russia investigation is gonna drag on forever and probably be inconclusive so everyone just needs to calm down and get over it. This is the same Masha Gessen who has been terrifying me with visions of the U.S. turning INTO Russia (erosion of press freedoms, for instance).

But after work I sat in on an ACLU conference call about immigration and policing in sanctuary cities, and I also saw the signal fires going up around the internet about the Senate healthcare bill. And I started to feel a little better again.

END_OF_DOCUMENT_TOKEN_TO_BE_REPLACED

The disgustingly hyped and teased announcement in the Rose Garden was today. There was a band playing. I didn’t watch that garbage.

Meanwhile, the country continues to be racist as hell:

A black friend of mine was working her job in a shop in downtown Seattle yesterday and a white man saw her through the window, opened the door and yelled “F___ YOU, N____ !!” Just out of the blue. Just to yell at her.

In my sister’s primarily Mexican & Filipino neighborhood in California, white supremacists from somewhere else drive through looking for Black Lives Matter signs in yards and windows. They come back again and again once a house is identified, shouting at and threatening anyone they see in the yard or driveway or porch. The people she knows who have been targeted are white like she is. She’s afraid to put up a Black Lives Matter sign because she’s the only white person in her household — and if they’ll harass and intimidate white people with BLM signs, what would they do when a dark-skinned Mexican-Filipino man is the one associated with the sign?

And then there’s Russia, other bullshit, and a Twitter dig from none other than sweet, square Ken Jennings. 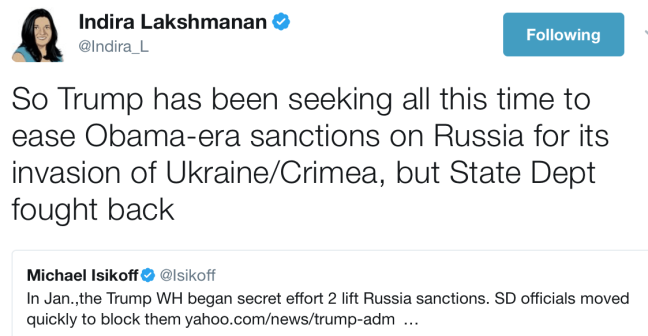 Sean Spicer’s briefing was listed on C-Span as Audio Only. Then it had the little “Live” button next to it but when you clicked on it, it said “Program Unavailable” which is not normal.

Then there was a headline that the White House asked outlets not to broadcast it live but said it would be available at some point. That was a real departure. A few outlets broadcast it live anyway, but some of them had weird things like the Veteran Affairs guy on camera, but then it cuts to just a picture of Sean Spicer, like there’s going to be audio, but the audio is only 12 minutes of elevator music.

Then on youtube I found the briefing, which was very weird. Very weird. All questions on Russia will now be addressed to the President’s private lawyer.

And “covfefe”? That was intentional, not a typo. This caused howling and laughing and exclamations of “WHAT??” from the reporters. They were calling out, “What does it mean?” and “What is covfefe?” and “Why did it stay up so long?”

Most of the questions were about the Paris climate accord, but there was also a question about how Ted Nugent called for Obama to be killed and then got invited to the White House by Trump. Sean, incredibly wearily, was just like “Yeah, I don’t know anything about Ted Nugent saying that.” And then you hear April Ryan’s stern voice, “Ted Nugent did say that, Sean.” He was already moving along to the next question he wouldn’t really answer.

Today is a doozy in Trump-Russia. Everything feels terrible and nothing seems to matter.

This is terrifying, because I would confront someone who was harassing two Muslim women on a train:

And what the fuck is this?

I don’t know what this is about, but it looks shitty:

And here’s some good news:

Ok, and this too:

But then tonight there was mostly THIS: 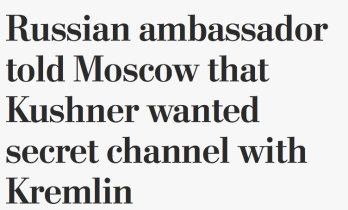 Oh hey, everybody. It was kind of a quiet day. 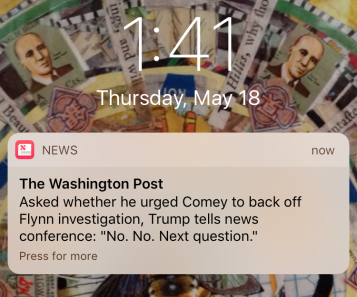 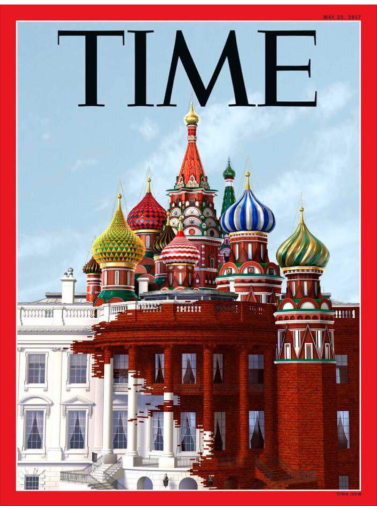 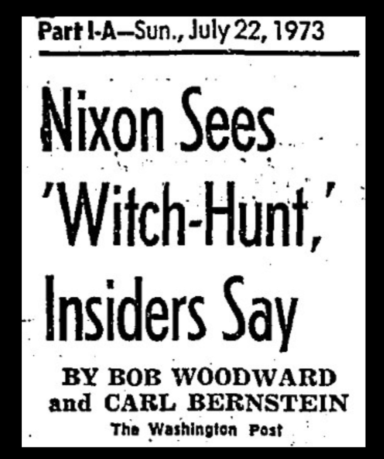 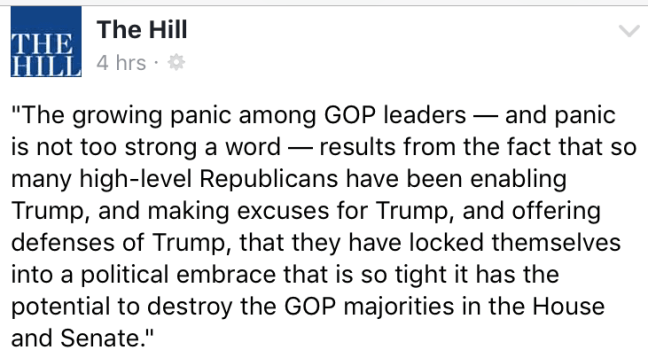 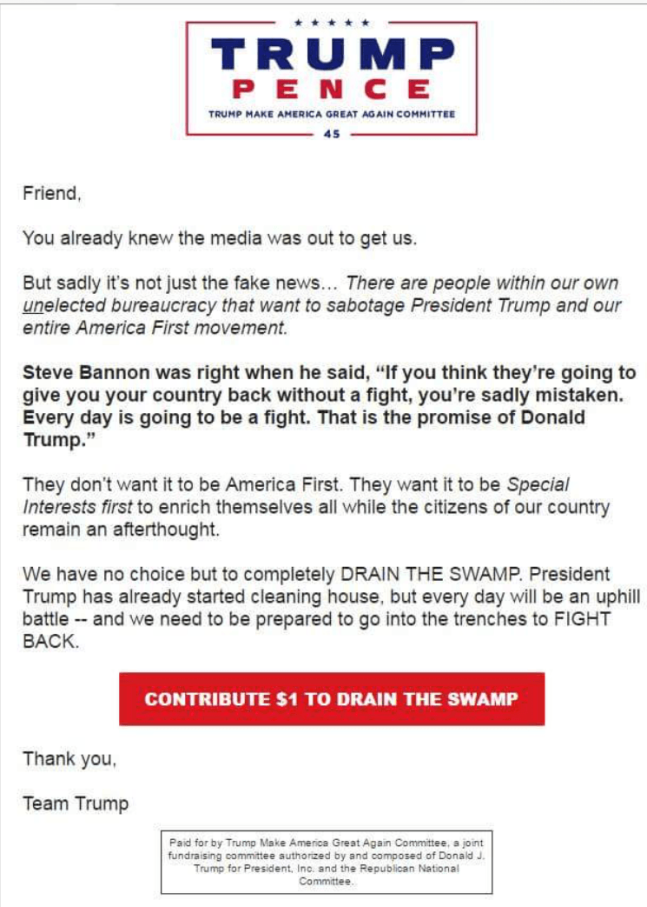