For awhile this giant book became just another surface, a substrate, and the life of my kitchen table was carried out on top of it. But then I had to enlist the book in my battle against light pollution. I barricade myself in each night. Between the book and the cardboard it came in, I can block a lot a light out.

But I have to keep going through this book. Ronald Wimberly, Matt Huynh, and Yuko Shimizu await me, deeper in. And though I am often too sleepy at night in my little apartment, I like communing with all these dream snippets.

David Petersen’s Little Nemo page has an old-fashioned, vintagey feeling. I think these might be my favorite, because to me they are new and nostalgic at the same time. Unfortunately, it also seems to mean a racist imagining of Imp (again).

But we meet the Princess in a yellow dress.

Her father, the king, sends mice to pick up Little Nemo and the Princess who are out on a children’s adventure. There is nothing too scary, and Nemo knows he is dreaming. He wants a lullaby to keep him asleep on his journey. He and the Princess are sweet little friends.

Then, on the facing page, Jonathan Tune and Eleanor Doughty (on colors) tell a very different story of a different kind of dream. It’s the same Princess in her yellow dress, but she and Nemo are grown up now and their friendship has fallen on hard times.They are on opposite sides of a war. And through a moment’s haste, a misunderstanding, she is shot. 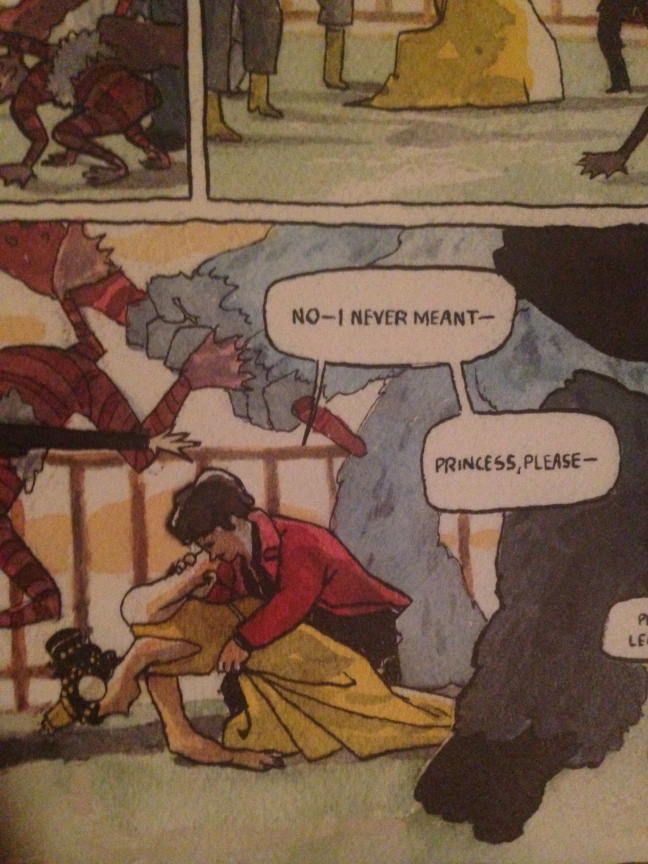 Little Nemo doesn’t know he’s dreaming, and all the fantastic air ships his mind created turn to dust when he wakes up grieving over the Princess.

In David Petersen’s page, the dream whimsy is contained and defined in clean inking and neat colors.The fantasy is safe for children.  The orderly, carefully described fur of the mice contrasts with the looser inks and water colors of Tune and Doughty’s page. In the war story, the underlying paper is nubbled, the pigment is washed and pooled. The shadows feel contaminating, hard to separate from the bright yellow of the Princess’s dress.

These pages make me want to write a series of novels about these two growing up together, growing hardened, growing apart. Like the Harry Potter novels, the tone would deepen and become more emotionally complex from book to book.

As soon as I got home from work, I took this daylight photograph of my houseguest Little Nemo: Dream Another Dream laid out on my kitchen table by the window. The way my journal goes with this page has given me outsized pleasure.

Like the best dreams, Andrea Tsurumi makes the mundane surreal and the surreal mundane in her contribution to Locust Moon’s Winsor McCay tribute anthology. She takes a simple play on words and flips it into the most charming, distinctive, and weirdly classic page in the book so far. Two mammaried oddballs guide — or maybe shanghai — Nemo on this adventure in Slumbraland.

We look down on the scene of the department store floor as these three figures wander through and cross paths with an array of breasted feminoids. Bras and department stores do stretch back just about to Winsor McCay’s time a century ago, making this scene both modern and vintage. Tsurumi also strikes a perfect vintage note with her matte pastels (pitched down a step) and her clean noodly lines. Her art reminds me of boomerang formica tabletops:

Tsurumi makes all the bras taupe and telegraphs “fun” by using squiggly lines instead of bright colors. This is how she keeps her whole page locked into a handful of carefully selected hues. The color scheme is distinctive, disciplined, and pleasing–the playful black lines neatly corral each flat shape. The page is full of uncluttered movement as a cheerful, anxiety-inducing tangle swallows up Nemo.

Surrounding this little boy with breasts and bra jokes might seem daffily subversive but it’s also just what happens to little kids obliged to tag along after mothers and older sisters. It’s along the lines of the neighbor woman nursing her baby on the porch on a hot day — no big deal. This is classic childhood stuff, just the usual nibbling at the edges of the adult world that sometimes turns into a Fourth of July dunking booth. It’s a page that’s funny because it’s true, and funnier because a woman made it as a humorous shrug and a roll of the eyes. That authenticity also makes it laugh-out-loud funny when Nemo takes a peek under his nightshirt in the lower right, “waking-up” corner of Tsurumi’s page.

(Reading Little Nemo: Dream Another Dream; Part Something of Many)

It’s important to have fun with objects, and I am having the most fun I’ve had since I bought a manual typewriter in 2012.

Today’s page is a crowd-pleaser, and I never miss a chance to be among a pleased crowd. The bull’s eye look of Peter Hoey & Maria Hoey’s page was already familiar to me because it shows up in a lot of marketing materials for the book. The dream story they tell is serviceable, but the real deal with this page is that it looks good at a glance. It goes down in a big glug. It’s eminently quaffable. Clean black lines. Thick white gutters. Creative paneling decisions that don’t get tangled. Dark teal dominates the page, with pops of muted red. Not too much is said (what a relief some days, huh?) and what is said is in big clear block letters.

I took a photo from above the page–and even on my phone, with crap lighting, the picture turned out crisp, clear, and legible. So much so that it didn’t seem sporting to include that picture! So here is this one instead.

In our next installment, we get excited about that business on the right by Andrea Tsurumi.

(Little Nemo: Dream Another Dream is a Winsor McCay tribute anthology by Locust Moon Press, which I am not affiliated with.)

(In which I “review” a book with giant pages, page by page.)

Jeremy Bastian’s contribution to this Little Nemo project is in black and white and full of pleasing details in the wall paper and around the edges of the panels. It’s a few small things done lovingly. Bastian fleshes out the kernel of a dream–“there was a ship that was also a giant shoe… and I think the crew was insect pirates!”

His lettering and word balloons are unassuming, and they go well with Nemo’s boyishness. Nemo isn’t so much boyish as he is kiddish. His curiousity, his exclamations, the way he tips over the lip of the bath tub and into this dream–everything right up to and including his rumpled “Yikes!” when he wakes up in the last panel–everything is endearing. Everything makes us feel a little tender toward him.

If you think about it, you really only have the patience to hear the dreams of people you feel especially tender toward, like little children. “Any dreams last night?” my mom will ask my nieces at the breakfast table. Her eyebrows will be lofted in receptive encouragement and if one of them nods yes, she will start to beam. Not so for me; I have grown too far past that cherubic phase. If I started to tell my mom how I had to haul a casio keyboard up a slippery ladder to find a skein of yarn, her eyes would glaze over faster than you could say “rapid-eye movement.”

I can think of one exception to the general rule that dream-reporting is a children’s game. My friend Gina’s entire family has a way with dreams and the telling of them. She recently texted me in the middle of the workday: “Uncle Ferd had a dream that he tried to google ‘mayonnaise juice’ on the piano.”

(For this series, I’m reading the anthology Little Nemo: Dream Another Dream by Locust Moon Press. It’s a tribute to the newspaper comic strip by Winsor McCay, which came out over one hundred years ago and is still blowing people’s minds)

Little Nemo: Dream Another Dream came out in 2014 and I was among the first batch of people to get a copy because I signed up for one through Locust Moon’s crowd-sourcing efforts. I thought it sounded cool.

I will lay before you the extent of my ignorance–I found out who Winsor McCay was only through the press for this Locust Moon tribute anthology. I didn’t know that there was this genius cartoonist hero called Winsor McCay that started this big full-page newspaper comic strip in 1905. The Locust Moon gang rounded up dozens and dozens of contemporary cartoonists to each contribute one McCay-inspired story in this giant-page format. The result is a book that is a giant object.

I’m not always the best with objects. Here’s what happened to this one. I had it sent to my office address instead of home, because I didn’t want it stolen while I was at work. It arrived encased in cardboard. It was a bit cumbersome to haul with my other commuter accoutrement, and my buses are so crowded, and I’m always so vanquished at the end of the workday, that there never seemed to be a good time to lug it home. I forgot about it, and it leaned under my desk for several months.

Then I brought it home and leaned it somewhere in my apartment. Forgot about it for a few months. Then a new neighbor got an overly aggressive porch light that penetrated my blinds at night, and I realized that the Nemo package was a good size to blot out the light, if I propped it up against the window. In the morning I hefted it down and leaned it against the bureau. That’s how art gets treated sometimes!

Today is New Year’s Day, the great day for Generally Getting Your Shit Together. Since it’s a new year and a new me, I decided I was no longer the sort of person who lives quite so much like a Boxcar Child. I propped the package up on the chair and cut it open. Lifted the book out and tore the cellophane away. Then I stopped and cleared off my kitchen table, because I needed most of the surface.

It’s refreshing these days to encounter a physically imposing book. Seeing it dominate my kitchen reminded me of how my mom kept her Audobon Baby Elephant Folio of bird illustrations open on a special wooden stand in the living room, as if it were the family Bible.

So far, I’ve only read Bill Sienkiewicz’s fiery introduction in praise of Winsor McCay, in which he first takes a swipe at the shallow way praise is thrown around these days so that we will know: When Bill Sienkiewicz says Winsor McCay is a genius, he is not saying it like someone might call a sandwich “awesome.” OK. Got it.