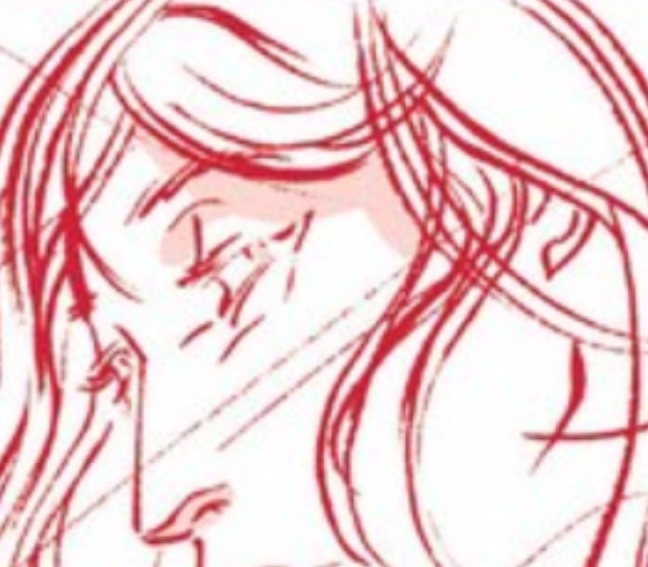 Island is an Image project that Brandon Graham and friends put together. It’s part anthology and part comics magazine, and it’s full of treasures. Island #6 will be in comic shops next Wednesday (January 27) but today I’m looking back at the first and second issues, which included the chilling, warming, red-inked tale “I.D.” by Emma Rios. 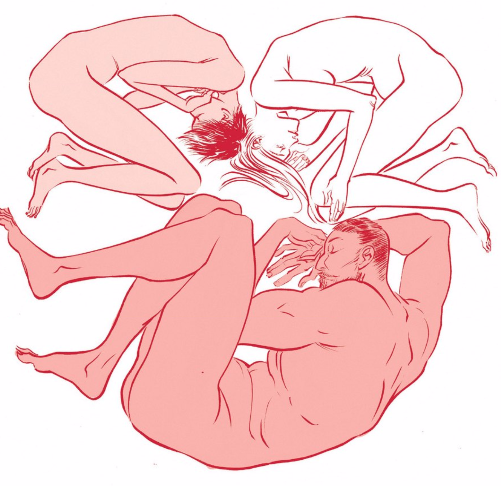 I.D. opens with three strangers meeting in a coffee shop in a future that feels familiar. They are all part of a pilot program to have their brains transferred into new bodies. The story quickly zooms out to show a Mars colony beset by political unrest, then zooms all the way back in to the insides of each character’s mind, and the smallest moments between them, and the touch of their skin against surfaces. All of it is in red. Some of it is in the stark red and white of a china pattern. Some of it is in the dusty pinks of Mars. In the first panels, the two men learn that prickly 50-something Charlotte is a writer. Themes of the wry, observant writer are spun throughout I.D., turning the story into a fantastic literary mic-drop by Emma Rios, a woman who is largely known as a visual artist. 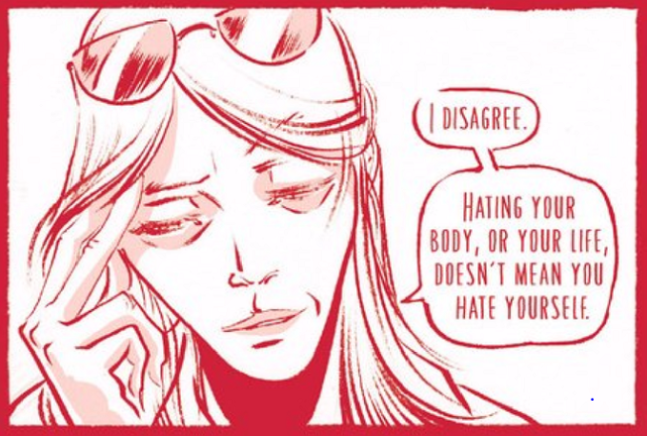 Charlotte, Mike and Noa start to talk–with awkwardness, diffidence and sparks of chemistry.Each has his or her  own reasons for wanting a new body–and none of them thinks the others would understand.

The world beyond their restless broodiness soon comes crashing in–on the television, and through the glass windows of the coffee shop. Rios’s art pivots from quiet eavesdropping to slashing, furious shapes and lines. After a dizzying stream of action panels,  the three manage to get away from the protesters and militarized police. It’s the chaos, not the conversation, that makes them intimates. And this leads to a strange night in Charlotte’s apartment, with more conversation, emotion, and hi-jinks. It’s the ultimate sleepover, really. 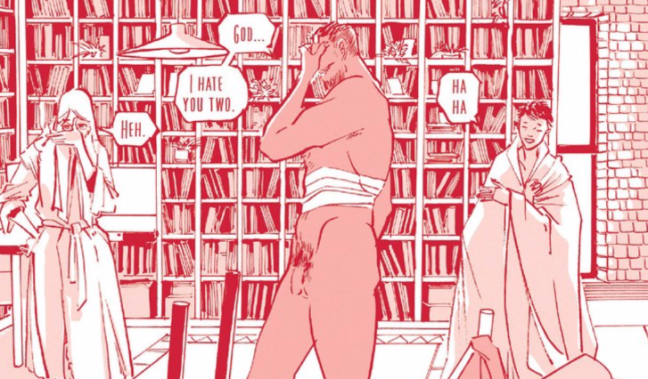 But all the while, there is this bone-chilling awareness that they are planning to let their bodies die. It’s a cold current running underneath the human warmth we see developing between the three. When they part the next morning, Rios wraps us around Charlotte alone in her apartment. We curl like Charlotte’s fingers around her cup of tea. Every solitary, visceral moment is allowed to pass in real time. And then she begins to write.

One of the things that makes this story immediately great is that Rios has the restraint to go small when everything big is happening. It’s taking place on a partly terraformed Mars, in a time of popular uprisings against an oppressive class system, in a future where science has advanced to the point where your brain can be extracted and put in another body. It is terrifying. And still everyone is just locked in their own skin and in their own experiences, trying to connect through a hailstorm of identity issues. 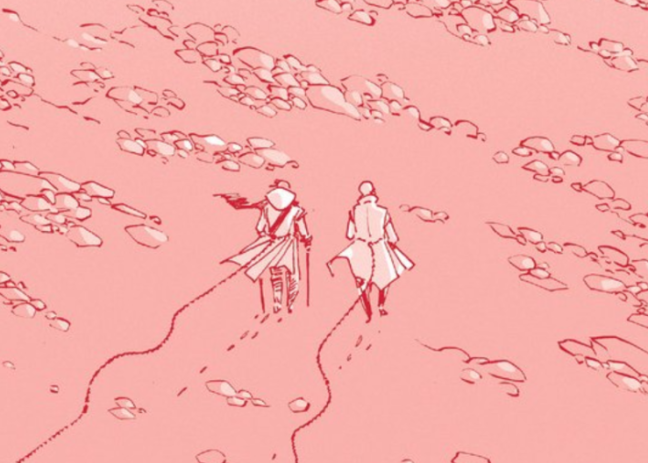 (I accidentally lapsed into re-cap mode, but there is much more to the story beyond what I described–the disturbing political and scientific details of the program, the outcomes of the psychologically and physically risky surgeries, and of course the  arcs of the relationships between Mike, Noa, and Charlotte. Which is all to say, go get Island #1 and #2, and generally get into Island because this is the caliber of work that the series includes.)

There were a couple of Marvel sequences recently that made me think “this is why I read comics.” Even though the pages are in two different series with two different artists, they are both colored by Jordie Bellaire and they both feature the white-haired witch, Agatha Harkness. In both cases, we see how a limited palette shows off what Bellaire can do–and how heavily Bellaire contributes to the integrity of the stories she works on. 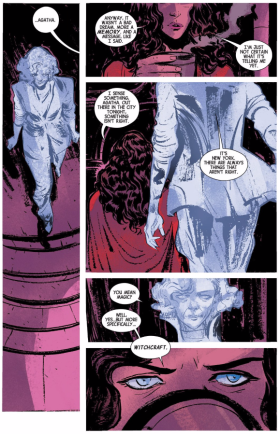 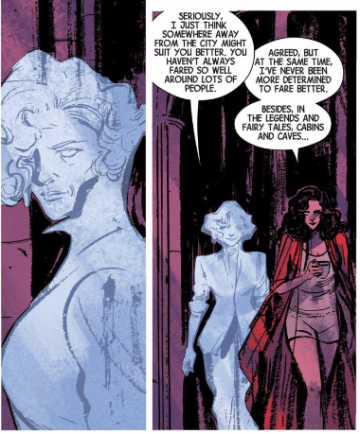 Agatha is dry, sardonic, and all in blue gray. Her coloring matches Wanda’s sad eyes. Wanda’s red dressing gown strikes a minor chord with the magenta of the room. These rich bloody colors work with James Robinson’s dialogue to drench the panels in a feeling of privacy and the bond between two women.

In The Vision #3, we go back in time to when Agatha was alive. She and her familiar are performing a ritual to see into the future. The mood immediately shifts with time and place because the colors are so subdued after pages and pages of the Vision family’s bright green hair against their red skin. The Agatha panels start quietly enough. 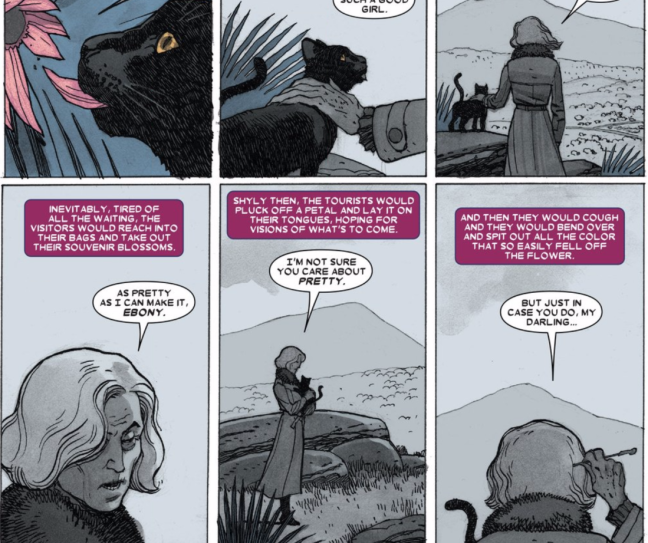 The dimmer palette accentuates Gabriel Hernandez Walta’s inking in a way the earlier pages, bulging with color, don’t. It’s a sort of nakedness. Tom King’s narration carries through the scene, moving at a different pace–on a different path–than the pictures. The boxes have been magenta all along, but  now they seem to presage Agatha’s appearance. 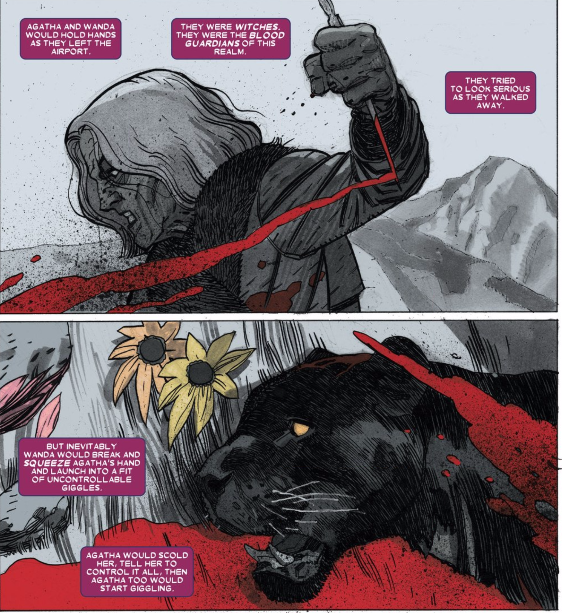 As the Agatha panels turn vicious and bloody, the red/magenta juxtaposition appears again–and again it speaks to intimacy between Wanda and Agatha.

The carnage reminds us of another supernatural white-haired woman Bellaire colored: Alice in Image’s Pretty Deadly by Kelly Sue DeConnick and Emma Rios. 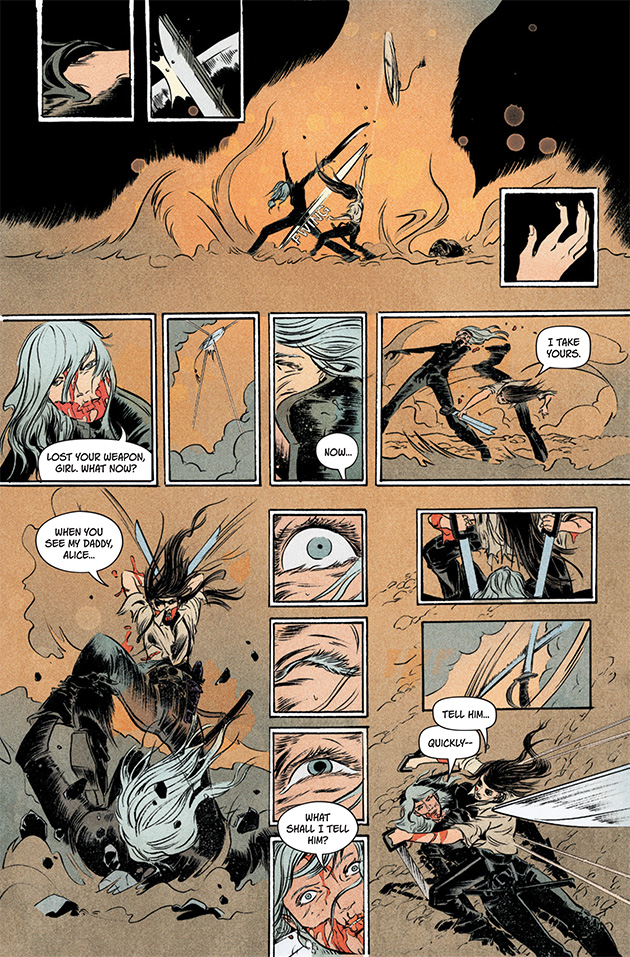 With a few colors, Bellaire both heightens Rios’s lines and stays out of their way. It’s one of those things that looks easy when done right–but if everybody could do it, these books wouldn’t stand out from the field as much as they do.

In Ody-C #6, beautiful “He” reads history books about wronged goddesses and queens who are raped, slut-shamed, killed, and so on. It’s unclear what they mean to him. The stories are inter-mixed with He having a bad time as a sex slave who has been first rejected, then cut loose. He is the stand-in for Helen of Troy in the Odyssey. We know He is considered beautiful, but his stance is meek and uncertain. He as awkward as a male stripper at a bachelorette party in a library. We never see his face. His butt cheeks hang out in a shiny gimp suit. There’s also some kind of fancy dongle on his dick. A window in his suit showcases his Adam’s apple, like a nod to the boob window in female superhero costumes. It is sad.

Christian Ward’s art and Matt Fraction’s writing are vigorous, ambitious, intertwined. The colorful, swirling silliness and mythological mash-up of Ody-C is as glorious as ever. There’s a lot to love, but it’s hard to  unsee the ridiculousness of these male creators gender-bending the Odyssey, loading it with women, giving the human species a whole new female-ish sex to exploit (the sebex), and then patting themselves on the back for caring about what it all means. As earnest-seeming as Fraction has been about his intentions with Ody-C and what the story “reveals” about society—he is just a kid in a sandbox playing with toys, and his toys are colorful scraps of rapey mythology.

Ody-C was more fun in the first arc, when women warriors were tearing up shit, behaving badly, and marauding across the universe. It’s less fun to follow a male sex slave in a gimp suit in Ody-C #6. Except it’s actually mawkish and wincingly funny—so was it supposed to be more fun? Is Fraction making a point about sex slavery in general? Are the creators… making light of sex slavery? A thing that women and children all over the world are enduring right now? Maybe we weren’t supposed to laugh at He, but we do because we recognize. The shock of relating more—on a real, everyday level—to a powerless man in a stupid gimp suit than to the woman warrior Odyssia makes it hurt to laugh.

It’s hilarious when He is all primped to spend time with Ene, but she’s too busy to think about sex so we just see his little slumped figure standing alone, with his upper thighs bare above his tall boots. It’s ridiculous the way he looks, as a three-quarter-sized man marching along in a strange city in his gimp suit. The way he cocks his head to the side like a dog when the woman at the whorehouse asks him if he’s buying or selling. He has to work as a janitor in the whorehouse because no one is interested in paying to have sex with him, and then we see his little shoulders as he sweeps up—pathetic. Ward keeps pulling the frame away from him dramatically, making him look small and alone.

If Fraction and Ward think this is what it means to turn women’s prettified servitude on its ear—well, we consider ourselves more than this. We consider ourselves something strong anyway. We think of ourselves as clever survivors. We do not see ourselves as pathetic shells. So if a large point of this book is to say something about gender issues by flipping the genders – WHAT ARE YOU TRYING TO SAY? So far it just seems that women are magnificent when they are dominant and have masculine traits. Men are ridiculous and pathetic in a feminized role. We are invited to laugh at He. There’s nothing subversive about him to make up for it.

Forget ancient, theoretical times. Forget fiction and mythology. It’s happening now in Iraq and in Kirkland, Washington. Forget even sex slavery itself. He being left on the shelf and then cut loose resembles nothing so much as the actual lives of housewives. Forget housewives even. It’s just women, expiring and being left on the shelf. Every day. Fading away and becoming invisible. Told it’s happening to us, told to fight it, then shoved to the side.

Once Fraction made a claim to making a societal statement about gender (in his commentary in the back matter of earlier issues), he put himself in a bind. He should have stepped off with that nonsense, because it’s not his place to step back and forth across the line of poking fun and being deadly serious. Or he’s not doing it right. We women can chortle along with Amy Schumer’s skit of Julia Louis Dreyfus’s “last fuckable day.” People who survived ghastly divorces as children can laugh grimly through a dark movie about a family falling apart like The Squid and the Whale while their spouses from happy homes might find the whole thing “too depressing to enjoy.” Stephen Elliott can auto-eviscerate in his novel Happy Baby about being submissive to an abusive woman after being raped by a guard in juvie as a boy, and we can respect this truth of his as a man who has had bad things happen to him. It’s an authentic experience of someone shoved into submissive roles and then seeking them. Elliott’s not trying to play a game with the sexes.

So what do you do if you feel the way I do, but like me are hooked on Ward’s art and don’t want to give up on Ody-C? Just step back yourself. Reduce it to the patterns and lines on the page. The words don’t even need to be read. The letters are just objects. The word boxes are just another design feature in these busy pages. A gimp suit is not a gimp suit. It only reflects light differently than the patterned folds of cloth on the servants who help to make He beautiful for his mistress. We are children and know not of sex. We are Virginia Woolf stream of consciousness. We are sensations. We open the hatches of our eyes and let the shapes and colors fall in.