Writing one of these year-end wrap-ups makes me feel like I’m leaving too much out but this thing was making me crazy enough as it was. I mostly just picked the characters that I could use to say what I felt like saying about comics. Now that it’s done, it *IS* kind of fun to scroll through this diverse array of characters with all the colors and textures bringing them to life in their panels. I wrote this for women-centric mag STACKEDD but I have man favorites too, a separate list I will try to put up here before New Years. Cheers!

After 75 years and a zombie spin-off, Archie Comics has started again back at Riverdale High, on issues 1, 2, and 3 (so far). With the fresh eyes and star power of Mark Waid and Fiona “Faces I Crush On” Staples, it wouldn’t have been surprising if the series reboot was clever and fun, but not a very Archie new Archie. But Waid and Staples have created the Archiest of Archie comics, making it a sheer pleasure to meet everyone again, this time all the way back at the beginning of the story.

Archie Comics were my comics when I was a little kid, but when I came back to comics as an adult, I didn’t feel like I could admit that to anyone. In a way, I was surprised that Archie Comics even still existed. I glanced over recent (triple-digit) issues of the legacy Archie comics, and the new Afterlife with Archie for zombie lovers, and I found them both off-putting. In one version of reality the old neighborhood had changed beyond recognition. In another, things were too eerily unchanged.

I bought Archie comics at the grocery store when I was a kid, and maybe that gave them the lasting sense of being a commodity, under-valued even though I loved them. Maybe I thought they were a little lame even then, like I knew it was part of some childhood yen for bright objects and plastic toys. My older brother systematically reinforced my feeling that I had bad taste in pop culture, and I transitioned from Archie straight to Seventeen magazine with a sort of normcore acquiescence.

But when I came back to comics over twenty years later, I still wanted to feel what I felt reading Archie. I looked elsewhere for the Archie spirit and found it in She-Hulk, Ms. Marvel, Gotham Academy, and Rumble. It’s physical comedy, goofy wordplay, bright colors and youthfulness. It’s smart enough to slide down easy, smart without seeming to want that label.

In ways I wouldn’t have even thought possible, Waid and Staples bring Archie into today while preserving the wacky high school hijinks of the original. The hyuk hyuk jokes, the pratfalls, the aw-shucks body language, the cartoonish vocabulary of sounds and symbols are all there. There are little updates—some relief from relentless whiteness, the jalopy is of a 1980s vintage, people text—but these updates merge seamlessly with the old-timey silliness.

Archie still has cross-hatched orange hair, and Jughead still has a crown, but the characters have more expressive, detailed faces than they did back in the day. Especially with Betty and Veronica, Staples makes a good compromise between the scooped-out tweety-bird faces of the old Archie comics and the chiseled nuance of the faces she draws in her Image series, Saga.

Maybe the best thing is the dry-witted Jughead. Seeing him with that little injection of Staples sexiness makes me realize maybe he was sexy and central all along. Maybe I was just too young to appreciate him. Maybe I just forgot about him? Now I have a crush on Jughead and think he would be played by a young John Cusack or Joseph Gordon Levitt. Someone tired-looking and acerbic, yet somehow jaunty. 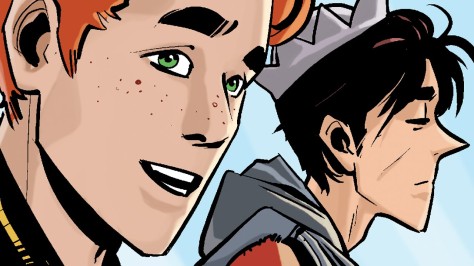 I don’t know if the all new Archie was written for actual tweens, or just for people like me who are nostalgic and may have peaked in high school (ahem!). I don’t care. They aged my childhood forward, floated over all the hurdles of hokiness and shabbiness, and gave me something bright and beautiful to enjoy all over again.