Today’s briefing was the first in a week. It only started 13 minutes late. Sarah Sanders looked tired and had very puffy ruffled sleeves on.

I’m never sure who self-selects to watch the briefing on the official White House live-streaming channel like I do. Is it mostly people who like and trust the White House? That would explain why the thumb’s up to thumb’s down ratio is always about 10 to 1. I watched the viewer count thinking SURELY it would be higher than usual. 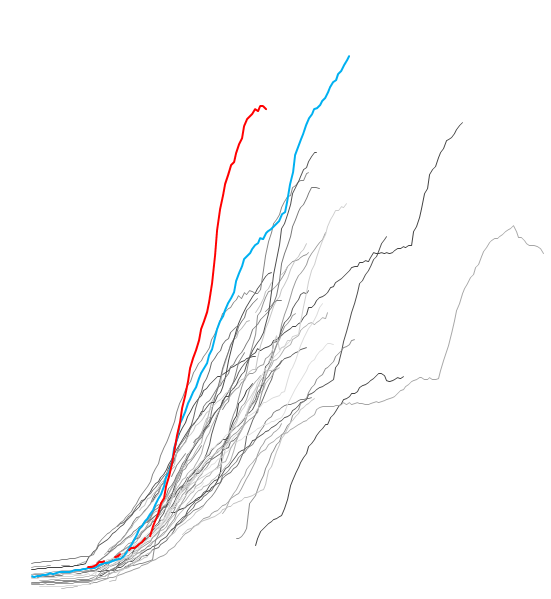 The red line was today’s briefing and the blue line was that briefing on July 18 right after Trump came back from Russia and everyone was freaking out about his equivocating and submissiveness to Putin. (X-axis is minutes, Y-axis is number of viewers. The red line starts 30 minutes before the scheduled start time).

The briefing started with Sarah Sanders using Mollie Tibbet’s death — a very sad typical random snuffed-by-man college girl sort of death — using her death to bludgeon undocumented immigrants with. It was a classic white supremacy move and when she was done it just hung in the air in a gross way for a few seconds.

It didn’t erase it, but it was just the smallest bit of salve to have the first question go to Cecilia Vega in the front row who launched into a Michael Cohen question in a very businesslike manner.

SANDERS:  I don’t have anything further for you.

SANDERS:  Once again, I have addressed this a number of times. Just because you continue to ask the same questions over and over, I’m not going to give you a different answer. The President has done nothing wrong. There are no charges against him. There is no collusion. That’s what I can tell you about this.