(Update: Correction & apologies to Yamiche below)

Today Raj Shah did the briefing because Sarah Sanders is at the Olympics with Ivanka. He didn’t keep everyone waiting and he seemed like a more decent person than Sarah Sanders again. Then he said some bizarre stuff about how Trump doesn’t like the “branding” of active shooter drills and thinks they should be called something else. 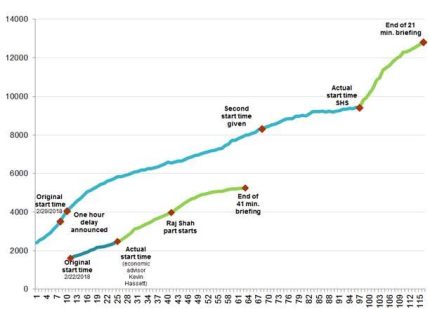 Just because I was bored, I graphed Raj’s briefing against Sarah’s on Monday (X is minutes, Y is live viewers on the White House youtube channel).

Here are the questions that reporters asked Raj today:

Raj Shah: “He thinks a drill that has a different name and is not — the brand of it, frankly, doesn’t frighten children, might be a better way to approach it.”

Correction, February 25. I was thrown off when Raj called Yamiche’s name, and it turns out that made sense — it was her first question asked in the briefing room, and she no longer works for the New York Times. Now she is a correspondent for PBS News Hour. My bad, Yamiche, and good luck with your new job. I stand by my earlier comment. Which is also tied up with some of my general disgust for the New York Times.

Today, though, Yamiche tweeted this: