Update (Feb. 6) — There was totally a press gaggle with Raj Shah on the plane on the way to Ohio, but the WH hadn’t got it up yet when I looked. And there was a WHPB today–a total shit show. More to follow.

I’ve been covering only the White House Press Briefing because it’s my particular interest and because it’s all I can handle with work and school exploding into more complexity than I was prepared for.

But what the heck, White House? The last briefing was on Monday, January 29. It was a VERY eventful week. The President hasn’t been out of the country. He also hasn’t been answering questions on “press avails” (when the press gets invited in to a room to briefly register that the President is indeed being the President, and then they are all herded back out again).

Is this fear of reporters’ questions? An acceleration of the slow death of the White House Press Briefing as an institution?

I checked the White House website to see whether there were any informal press gaggles that might have flown under the C-span radar. Nope. Nothing.

In the meantime, here’s an oddly subversive-feeling set of tweets from Trey Yingst. Trey’s publication, OANN, is pretty right-leaning. It’s one of the newer, smaller conservative outlets that the Trump administration credentialed to be in the White House briefing room. 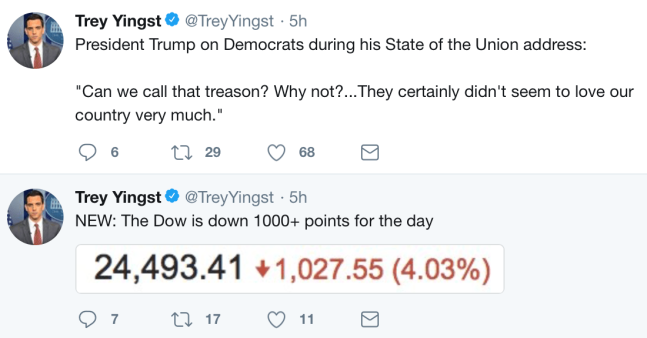 And I did think it was sweet that Trey put his press corps colleagues in his Twitter header photo.