So who is really the Tweeter-in-Chief? I looked at each day in the last few months that Obama tweeted. I added up his total number of likes for that day, and then divided it by the number of tweets. Most days he just tweeted once, but a couple days he tweeted two or three times. Then I did the same for Trump — just on the days Obama tweeted (to make it manageable to do this quickly and cleanly).

Trump sent a lot more tweets on those days, but look at his average like-per-tweet compared to Obama: 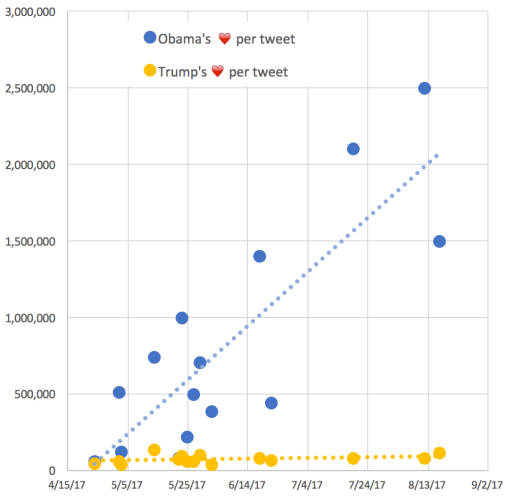 I added trend lines to show that Obama’s tweets seem to be getting more popular, while Trump’s stay about the same.

Now, if you think that’s not really fair because Trump sent SO many more tweets on each of those days… let’s look at the TOTAL number of likes Obama and Trump got each day, regardless of whether it came from one tweet (Obama usually) or 4-16 tweets (Trump). 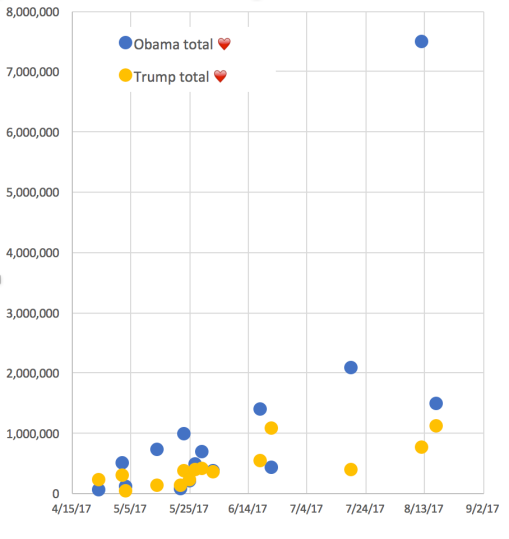 Again, Obama in blue smokes Trump much of the time. Most notably, with the three tweets he sent just last week after Charlottesville — that outlier dot in the upper right.

I harvested these numbers early in the morning on Saturday, August 19 when I couldn’t sleep after the football game (so they could have changed a little since then). I don’t know about you, but a little data-entry and Excel graphing is often just what the doctor ordered.