I don’t tend to bang the Hillary drum on this blog, but a year ago she accepted the nomination. And she’s getting smeared by Trump now. I don’t think she deserves that at all. It’s been giving me the feminist angries, as has so much else lately.

So, let us focus on something positive and therapeutically celebrate women making a difference. Today, Representative Maxine Waters’s interrogation of Steve Mnuchin (from a few days ago) swept the inter webs and “reclaiming my time” became a thing. She kept cutting him off when he was rambling to eat up time. “Reclaiming my time… reclaiming myyy time…” 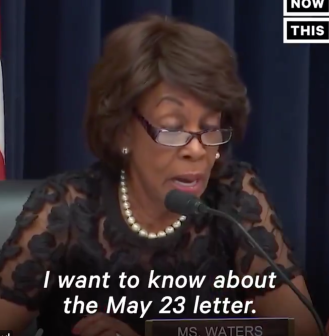 And then someone gave us this:

Nancy Pelosi wrote a letter to Mitch McConnell and Paul Ryan that managed to be both an extended hand of bipartisanship and an act of very dry, shady trolling. The far left called it pandering and caving. They never miss an opportunity to say Pelosi is too old and has to go.

The women of the Senate:

And I know it might be a bit much to keep going on about Lisa Murkowski and Susan Collins (when a squadron of Democratic women Senators, including Mazie Hirono, were also steadfast and resolute), but they give me so much hope. We need signs that we are standing on shared ground–that there are shared truths, accepted realities, acknowledged standards of compassion and decency. I need that right now.

And then there are these women:

For the whatabouters — does Sarah Huckabee Sanders’s utter unflappability and her willingness to stand up at the podium despite being large and average-looking (like most of us!) inspire me as a woman? YEAH. Kinda. But she has degraded and besmirched herself by working for the Trump White House so there’s no picture of her here.

But shout out to Scaramucci’s departing wife.

Don’t blame me for needing sparks of light in the darkness as we tumble downhill into autocracy.

Trump joked about police brutality not being such a bad thing, as he talked to a police department in New Jersey. It came across really racist and gross. And there was too much cheering, laughing and clapping in the audience of police officers. A couple officers were visible on camera looking disgusted. And a reporter in the room said it was much more awkward and less unanimous that it may have come across on camera.

So the police department had to issue a tweet:

And another one joined in:

Some people pointed out that the police department were just mad that he used the regular whistle and not the dog whistle.

Stephen Miller did a press gaggle on AirForce 1 — the same awkward flight that ended with a just-fired-by-tweet Priebus left alone on the tarmac. Anyway, so just imagine the chilling awkwardness of Stephen Miller, as he ended the gaggle this way:

Here are the questions he was asked leading up to that: