About a year after U.S. politics ate my interest in comic books, I found myself sitting outside Vancouver Comic Arts Festival, studying a Ben Sears print. It had been the longest, shittiest winter in a hundred years and now I was in the sun, staring at a picture like a child.

I had decamped that morning from Seattle to Vancouver, which is both foreign to me and closer to my original home in Alaska. Trump had decamped to Saudi Arabia. Between the two, my constant IV drip of political news had dried up. My phone didn’t work that well in Canada, so I couldn’t even text anyone for a secondhand hit. The Asian stock markets wouldn’t re-open for another 24 hours. No information was coming in except the colorful details of the Ben Sears print in my hands.

Being in an unfamiliar place in new sandals gave me a feeling from childhood that I’d forgotten. There’s liking yourself, and there’s being all right with the world. As adults we try to do both those things and be reasonably happy. But sometimes when you’re a little kid you have this sensation of liking yourself in the world. Liking the places where you and the world touch.

So that’s where I was, with the sun warming my back and bright artwork in my eyes, when my boyfriend tapped my shoulder and said, “We have to go to this panel—not enough people are showing up!”

I hurried inside with him, out of the sunlight and into a small, dark auditorium. In a pool of light, a woman my mother’s age and a man about my age sat at a table. The woman was Katherine Collins, and the man was Brandon Graham. He was interviewing her about her life and career, and her return to actively working as a cartoonist. A collection of her Neil the Horse stories was being republished in a thick volume after a long hiatus. She held her Neil the Horse book parallel to the table and let it drop with a thud. “That’s my favorite thing about this book,” she said. She had a deep, wry voice and as soon as she spoke, I wondered if she had worked in radio.

The conversation started with her youth and her cartooning inspirations. I didn’t get the cartooning references, but I liked that she set workmanlike goals for herself when she was 9 years old. I liked that she was competitive and bluffed her way into a radio gig even though she didn’t have experience at the time. Among many other things, Katherine adapted old comic strips to radio skits. She said, “All the other people in the skits were much better than me, but I didn’t care. Because I wrote them.” 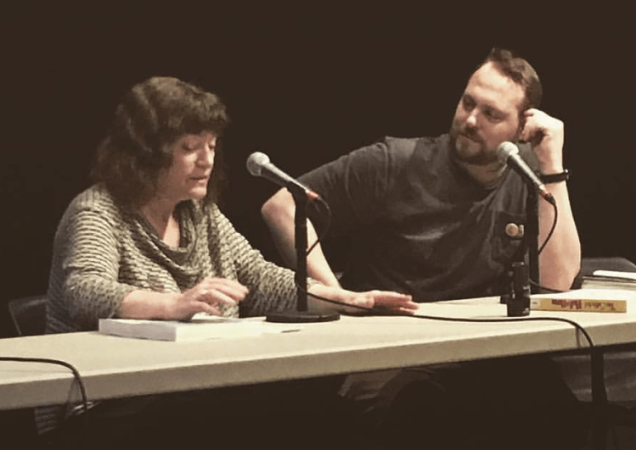 I didn’t know what Katherine and Brandon were talking about half the time, about cartooning and the CBC, and the scene in Vancouver and Toronto. It was like listening to BBC World Service when you can’t sleep, and letting the enjoyably unfamiliar flow past you. They talk about cricket and you stare at the ceiling knowing nothing about cricket, clenching and unclenching your toes.

When I was a kid, I tried to hear BBC English as a foreign language, reduced to the aesthetics of sounds bumping up against each other, and the texture of voices. We only got one FM station up and down the radio dial—it was static soft and hard everywhere else. That was the local community radio station, relayed by receivers on mountain tops to tiny logging camps and roadless fishing villages. There was also one station on the AM dial—a rightwing commercial Christian radio station.

At night I’d troll slowly through the static on both dials, listening for changes, trying to sift voices out of the noise. Once in a while, if conditions were just right, the CBC came in from somewhere. It was as if aliens made contact, me cross-legged on my bed in the dark, absorbing wisdom from another culture. But the next night, and the nights after that—no more CBC. Just fuzz.

Katherine said, “I’ve always had a great capacity for ignoring things I’m not interested in. It’s called being a snob.” This is the sort of bitchily quotable thing my Grandma Ann was always saying. She had a presence and a deep voice like Katherine. She even had a similar handsome look, with a strong nose and pleasing facial planes.

Ann was big-chested and rangy at the same time. From my bedroom perch, I watched her loping up and down the cannery dock throughout the 1980s. She was a jack of no trades. She did all right as a housewife but wasn’t into it. She was a little disorganized. She helped with her husband’s business and she raised three kids as well as her personality would allow. She liked her grandkids, but not excessively. She scribbled in notebooks. She liked novels, the newspaper, baseball on television when she could get it. She liked playing cards. She was sardonic and opinionated and mellow and mirthful. She walked her dog, admired her cat, and knew the names of wildflowers. She was probably depressed. She was hard on herself in a way that cut other people down too. Ann’s potential was unfulfilled, like everyone else’s I knew, but she had an air of just being and that seemed like more than enough at the time. Nobody at her memorial suggested that she’d been kind, and I was glad they didn’t lie just because she was dead.

Katherine isn’t like Ann at all. Besides being a generation younger, she had and has direction, and passion, and ambition. She made Neil the Horse, and she interviewed comic book and cartooning greats on national radio. She wrote songs for a musical version of Neil the Horse that she produced. She was and is the voice of Neil the Horse. And then she’d been sidelined from that by life, circumstances, the publishing world, animation studios. In the early 1990s, when she was in her early 40s, she said she could no longer get published. Katherine said, “It’s kind of sad and ironic and irritating that I was stopped doing my work back when I had momentum.”

I’m going on 40 and I feel like I haven’t worked up that initial head of steam yet. I’m low energy and inefficient, I lack confidence and am an all-around foot-shooter. If I were in Alaska, it would matter less. If I were fifty years ago, I would have had a family along the way. I could have been like my grandmother but I was trying to be like Katherine, and falling through the gap between them.

Katherine is trying to get that productive part of her life back, but has less energy and more health problems now. She’d just been granted a big award in Toronto. She said, “Now I have to come alive again and do the work I’d hoped to do.” She said she might only have about fifteen minutes before she keeled over. She was joking, sort of, but she’d been sick and the people in her family tend to get Alzheimer’s and check out by 80.

A man in the audience asked her what she’d done since the 1990s. Even if she didn’t get published, was she still working—did she have a backlog of work to bring to light? She had an answer about a half-finished graphic novel but I understood that she had just been living life and sometimes that’s the thing that takes you away from your work. Meanwhile, you watch people fall off the edge of the world and disappear, and you feel yourself getting older and closer to the edge.

When Katherine said, “The next thing is to see if I can actually do it,” it bolsters me. I need to see other people lack confidence so I know to muddle on despite my own lack of confidence.

She’s going to do more Neil the Horse, but she talked about the contrast between a singing, dancing horse and the state of the world. “The human race is exhibiting the worst characteristics all over the place,” she said. She wants a different point of view than before. “I don’t want it to be somber, but I want it to be a little more aware of what’s happening in the world.”

I don’t want to be somber either, but every day I’m shellacked. All day I feel the fact that we’re living through a national emergency. I listen to political podcasts, show up to marches, attend meetings, and shell out more than I can afford for human rights and life on earth. At night I religiously blog the headlines and the press briefings in a hit and miss, scrapbooky way. I keep this blog under the radar because I work with Republicans in a conservative industry. Still, every few nights a maudlin personal essay finds its way in. I’m flying off the handle and white American men will feel the heat of my scorn.

What I haven’t done is anything else. No Wednesday trips to my local comic book shop. No reading floppies on the bus ride home. No reading comics on a bench by the lake and scribbling notes. No reviewing, no blogging, no musings about comics.

Katherine reminded me of something I did know before—anything you want to say about the world you can say in a cartoon, even one featuring a singing, dancing horse. And more than that, writing about comics was never just an escape for me. Anything I wanted to say about the world, I could say it in essays about comics. Not in a direct, social justicey way. But just about these lives we lead and the things that hit our eyes on the way down.

(P.S. I learned later that night that Katherine Collins is a transwoman who previously published under the name Arn Saba. Although this information did round out my understanding of her childhood and the first part of her career, this essay is just about my experience of watching her and listening to her that afternoon when I didn’t know.)

2 thoughts on “Katherine Collins One Afternoon”