I listened to the latest podcast episodes from 538 and Slate TrumpCast yesterday, and they both *really* irritated me.

On 538 they were all glib… first, like “Is the resistance to Trump losing steam?” and then, asking one another, “What could Trump do to quell the resistance?” Oh great, brainstorm for Trump!! Thanks guys. But I also had a visceral reaction to the woman on the podcasting team, who I think is Clare Malone. It wasn’t necessarily fair to her, and I know there was some kind of uncomfortable self-recognition at play. But she drove me NUTS. She kept making stupid jokes but not fully committing to them. So she would start to launch into it and then feebly curl away from her own joke. It was weak. It bothered me that the one woman on the podcast would be the one to do that. Stupid jokes should be done with joyful confidence, like a black lab jumping off a dock on a hot day. Men seem to know how to do that. But don’t start to make a stupid joke and then lose heart and pretend you were saying something smart but snide instead.

Speaking of snide, that was the whole problem with Virginia Heffernan on Slate’s TrumpCast. She was committed to tearing into Rachel Maddow for Rachel’s presentation of Trump’s 2005 tax form, beyond any usefulness at all. She was so in love with her own takedown that she ignored all the usual rules of writing for the ear, loading her sentences down with adjectives and barely giving herself space to breathe. It sounded smug, it was gross, and it reeked of internalized misogyny.

But shit, now we’re talking about internalized misogyny. I was really frustrated that I was so disgusted by the presentation of these two female podcasters, when I give the Pod Save America guys, the Vox guys and Michael Barbaro at The Daily every pass!

Was I trapped in some sickening ouroboros of internalized misogyny?

Since I was already so unsettled and deeply rubbed the wrong way, it felt like the time to listen to Tommy Vietor’s interview of Glenn Greenwald on Pod Save the World. I wanted to listen to be fair to Greenwald, but I was worried about getting too agitated. Perfect solution. I was already agitated.

I’m really glad I listened. Tommy Vietor and Glenn Greenwald joked that their whole relationship up to that point had consisted of trolling each other on Twitter. Greenwald had asked to be on because he took issue with how Tommy Vietor had spoken of Edward Snowden in the past. I don’t know about that, but I felt that Tommy Vietor represented my Greenwald-skepticism in the conversation–and feeling represented, I was able to relax and give Greenwald something of a chance.

You know, I had a knee-jerk positive reaction to the Snowden thing back when it happened. Like Glenn Greenwald himself, I’ve been really worried about privacy and surveillance, especially since September 11. And I defended Snowden and his motives to people. I thought it was good he got out. And Glenn Greenwald was very cool to me for being the journalist that Snowden worked with first. And *then* Glenn Greenwald started the Intercept and a former colleague–who I admire SO much personally and professionally–went to work for him. My positive feelings toward Glenn Greenwald swelled.

Then came two things: First, the stubborn, vocal negativity toward Hillary Clinton *after* the primaries, which had a particular feel to it when done by white men on the left. This stank of holier-than-thou adherence to principles and indifference to actual outcomes. It wasn’t just Glenn Greenwald, but he got permanently associated with that group in my mind. Second, the constant pooh-poohing of anything to do with an investigation into Russia’s activities and the constant repetitive harping and harping on how the U.S. is evil and the C.I.A. is evil. Once again, it seemed woefully out of touch with our political reality on the ground. And like he’d just rather be right from his perch in Brazil, and he’s looking down at the rest of us silly fools. Maybe he does’t mean to come across as a smug white man who doesn’t give a shit about real outcomes on the ground. But damn. That’s how he comes across.

But I don’t want to have such bad blood between myself and Glenn Greenwald (obviously only in my head; he has no idea who I am). So many of my friends completely dig him. They dig him for the exact stuff that I don’t like. My bad blood with him feels like bad blood with my friends. And they are people I need to share a coalition with in these batshit times. And I want to like him. I like his face. He looks a lot like my grandfather looked at 40. I like that he’s a dog person. He’s smart. The Intercept is doing good work.

So listening to this Pod Save the World podcast was cathartic for me. I’m sure that GG might enrage me tomorrow on Twitter, but for now we are somewhat ok.

“I’m just trying to make ANYTHING make ANY sense.”

I’m watching TV (!!) as I type this, so I’m a bit giddy from over-stimulation. I wish I had TV at home, but not enough to actually get TV. I’ve been flipping between FOX, MSNBC, and CNN.

TV is mostly fixating on 1) wiretapping claims, 2) Trump doubling down on wiretapping claims while standing right next to Angela Merkel, 3) the DOJ finally sent a report to Congress today, and officials there immediately said that there’s no “there” there, 4) Sean Spicer quoting allegations made by a FOX news pundit (regarding the British intelligence agency)–allegations that FOX news itself said were NOT verified or backed by their team, 5) Angela Merkel’s body language towards Trump in several different moments, and vice versa, 6) By God the UK is PISSED at us now, and 7)FBI Director Comey to talk to Congress in open hearings on Monday.

Monday should be a fun day, because it’s also the first day of Supreme Court nominee Neil Gorsuch.

While TV yaps delightfully about wiretap stuff (wow, I am thirsty for television access), I’ve turned to Twitter to catch up on this Rex Tillerson in Korea thing which sounds like a fucking misadventure if I ever saw one. And people are freaking out. 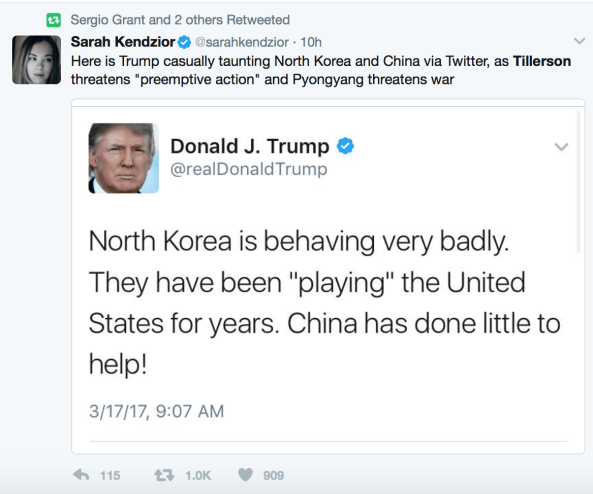 And here is the pool report. The pool hasn’t been on his plane with him (only one conservative blogger got that honor), but as many reporters as possible have flown separately and shown up at as many events as possible–still trying to be his press pool. Remember, it is very abnormal for the press pool not to travel everywhere WITH the Secretary of State. Sean Spicer said there just wasn’t room on the plane. 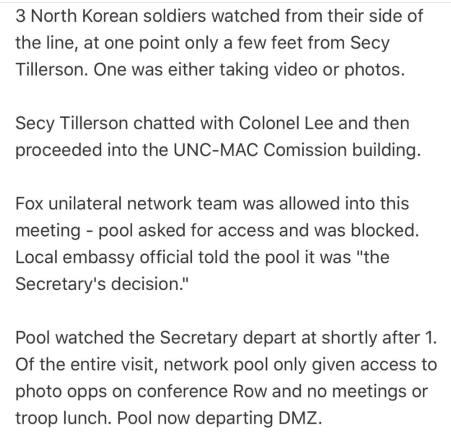