The 2018 mid-term elections are NOT that far away. If you got engaged right now, you *might* not get married until the fall of 2018. That is, if you were fancy people, unlike my people who get married at the justice of the peace on short notice for insurance reasons, and take Folger coffee cans to crematoriums to retrieve family ashes.

GETTING IN AND OUT OF HERE: The band Soviet Soviet was supposed to play a live concert on air at KEXP this morning but they had to cancel that, along with SXSW and their whole American tour. As they tried to get into the country from Italy they were separated, interrogated for hours in small rooms, and had their phones taken away. They had all their papers in order, had carefully planned ahead. Their American record label had all its ducks in a row. After being questioned, they were handcuffed and taken to jail in a police car like criminals, made to spend the night in jail, and sent back to Italy. They weren’t given their phones or their belongings back until right before they got on the plane. They were humiliated and relieved to get away from the U.S. Meanwhile, Muhammad Ali’s son said he was detained at the airport AGAIN. An American-born American citizen. It’s not about a travel ban — it has nothing to do with an executive order (which doesn’t even go until effect until March 16). It’s just all around fuckery at the borders. Agents throwing their weight around and being huge dicks to everyone, and especially racist huge dicks to people of color and Muslims. Tonight the AP is reporting that a Wisconsin judge is blocking enforcement of the new executive order for a Syrian woman and her three year old daughter. I’m starting to feel like the wall will be built just as much to keep us in as to keep other people out.

Five states are now suing the Trump administration over the new executive order.

GREENWALD STILL STUCK IN MY CRAW: Why should I believe Glenn Greenwald over other people? I don’t know why he sticks in my craw so badly. Maybe because I think he’s smart, and a lot of people I admire — smart people with integrity — believe in him. So, I have to acknowledge that Glenn Greenwald might be right and the rest of us might be wrong. But I also remember three things 1) Glenn Greenwald is invested in the idea that the intelligence agencies are sinister, 2) Glenn Greenwald’s ego is invested in his own idea of himself as a contrarian, and 3) so many women of color, and black women in particular — community leaders, thought leaders, artists, thinkers, organizers, activists — declared MONTHS ago that they have had it with Glenn Greenwald and his way of looking at the world. And I don’t know why he would be right and they would be wrong.

SEATTLE FUCKERY: “Holocaust is Fake History” spray painted on Capitol Hill synagogue in Seattle. The esses are dollar signs .The synagogue is choosing to leave it exposed for now.

When is it, when a former President’s spillover ends and the new President stands on his own merit? When does that happen?

WHERE’S THE BASELINE? I ONLY RECENTLY STARTED CARING THIS MUCH: I can’t tell what’s normal and what’s not normal, because I’m just paying attention for the first time. Dismissing 46 U.S. attorneys seems to be fairly normal. Except maybe when you don’t have their replacements lined up. Calling Dana Boente and Rosenstein personally to ask them to stay on seems a little strange — but I don’t know? The State Department asking the medical examiner not to release the cause of death of the Russian ambassador to the U.N. seems strange, but again — I don’t know? The world is so full of procedural ins and outs that we normally don’t need to pay attention to.

Speaking of not paying attention — on the radio this morning. NPR’s David Greene was asking David Urban, who was a former advisor to the Trump campaign, about the healthcare repeal and replace legislation. Greene was saying, was there something a bit odd or contentious or rushed about the way this bill was going through committees in the middle of the night?

URBAN: I think, look, we’re not there yet. You know, the old saying is you don’t want to watch sausage or legislation being made, and so avert your eyes, America.

GREENE: You’re telling Americans not to pay attention to this debate?

The White House Press Briefing was disturbingly jocular today. Lots of chuckles, laughing, jokes and banter. But most disturbing was when Sean Spicer said that Donald Trump said the economic data used to be fake but it’s real now (strong jobs numbers came out today). The reporters just laughed like “Oh Uncle Donald” and moved on. I listened to the press briefing this morning at work and it stuck with me all day. When I got home and looked at Twitter, I saw I wasn’t alone in that. 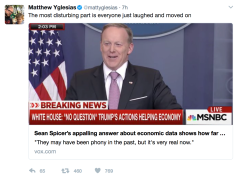 Questions the reporters asked Sean Spicer at the briefing today: