This is going to be a blur. It’s Monday. A bunch of stuff happened. I can’t recount it all. Sean Spicer had an hour-long press gaggle off camera. His first audio-recorded press conference of any kind in seven days.

I went to Pramila Jayapal’s town hall after work and learned a bunch about how Congress works. Because I haven’t known what to do since the election, I try to just put my body places sometimes–marches, rallies, meetings. I also try to learn how things work, and sometimes those two things over lap like they did tonight. I learned what kind of things other people in the community are worried about, specifically. The place was packed with a big, vocal, boisterous crowd. It felt like church. It also felt like she was our gladiator. I remember criticism of her before the election. People said she wasn’t the real progressive in the race. She was faux-progressive, they said. Now she is this new congresswoman born unto these crazy times, and she seems to be rising to the challenge. I don’t think anyone is saying she’s not progressive enough now. Also, she talks like a regular person. I scribbled pages of handwritten notes throughout the town hall, so hopefully I will roust myself to backfill some highlights tomorrow (running on fumes).

Listened to  Ana Marie Cox’s podcast interview with guest Ira Madison III. Ira is black, and he writes about film and television. It turns out I’ve been following him on Twitter for awhile. Ana Marie Cox is white. They seem to be friends in real life, and they had a long talk about race, inter-racial friendships, and what it’s like to be “the black friend.” Ira also touched on Get Out and “white liberal women,” and said something to the effect of how Hillary Clinton just needs to disappear forever, and reiterated a few times that 53% of white women voted for Trump. So this was no great reprieve for white women. But it was a good, warm conversation about uncomfortable things, and how it has to be ok to be called racist. It cannot be the end of the world. If you aren’t being called out for being racist now and again, you probably are too bottled up and not learning and not associating with anyone outside your own ethnicity bubble. And not having frank conversations about race.

I guess I just mention this to say, that it was somewhat cathartic after watching Get Out.

Khizr Khan, a citizen for 30 years, canceled a trip to Toronto. He said his travel privileges were “under review.” 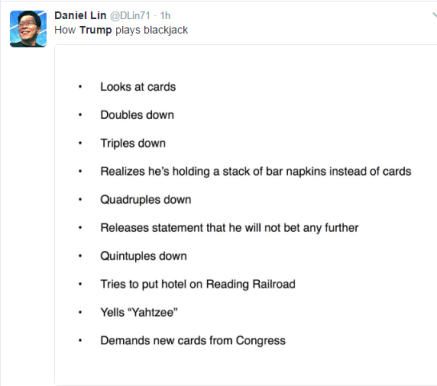