Chuck Cooper withdraws his name for solicitor general. Kellyanne Conway’s husband back in the running for that and also for another thing.

Trump talks to China, says he will respect One-China rule

Mrs. Abe is unescorted in Washington D.C. all day because Melania is AWOL… the awkward handshake and eye roll between DJT and Prime Minister Abe.

CNN: Trump to Dems: “Pocahontas is now the face of your party:”

Trump to Senators at the same lunch meeting yesterday: he went on about thousands of illegal voters being bussed from Massachusetts to New Hampshire, and that  Kelly Ayotte would have won her re-election bid otherwise. Afterward, an FEC commissioner called for Trump to reveal his evidence. She said it was too large and dramatic claim, and that she needed to see substantiation so that she could possibly start an investigation (basically calling his bluff).

On Air Force One today, Trump told reporters  that he knew nothing about the Flynn stuff (16 hours after Washington Post report), but he would look into it. Later Trump issued a statement saying Flynn has his full support.

Trump denies Tillerson his choice of deputy, Eliot Abrams, because Abrams criticized him during the campaign. An insider said it was about absolutely nothing except Trump’s own thin-skin and that Abrams would have been a strong choice for his governmental experience.

White House says it won’t appeal ruling on the travel ban executive order, and then says it will — I don’t know where that landed or will land.

The Stranger reports that every single Republican member of Congress from Washington State is hiding from his or her constituents. A Facebook friend posts a screen cap post from one of them. In it, she tells her constituents to stop reading the news, and “everything will be fine.”

CNN published a very circumspect article headlined “US investigators corroborate some aspects of the Russia dossier” — taking pains to word everything carefully and say that the most salacious allegations had not been corroborated and that CNN had never reported on the most salacious allegations in the first place. Spicer was roundly lampooned on the Internet for calling back, still angry, and still unable to come up with something better than “fake news”!! 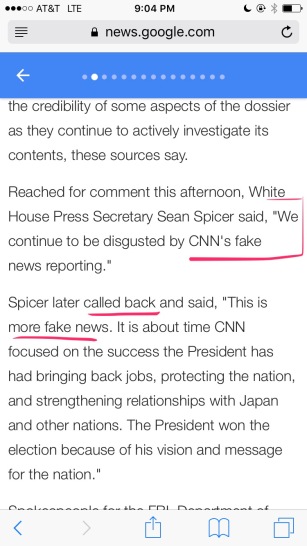 News of ICE raids in at least six states. 160 arrested in southern California. ICE first said reports of 100 arrests in California were exaggerated, then they said it was 160 arrests, but was just part of a normal surge. Reports on the ground at odds with reports from the government. Portland, OR panicking that ICE agents were using the public buses and trains to catch people (TRIMet responded to a tweet, saying that it was just a rumor). chicago tribune reports that a man was deported for tinting the windows of his car. Guadalupe Garcia was deported to Nogales for having used a fake social security number ten years ago in order to work at a water park. These are the crimes and criminals that are being targeted. Rumors of ICE going door to door. Rumors of ICE using people’s children to target them, descending on parents as they pick their children up from work.

I went to a presentation at the public library tonight on immigration and inclusion. It was a collection of short, personal talks by immigrants from all over–including advice from an ACLU lawyer about what to do if ICE comes to the door. The place was packed, lively, party atmosphere. Cookies and juice served. Unruly whooping and hollering for AGOWA Bob Ferguson. The library staffer at the beginning, said “We would like to begin this program by acknowledging that we are on Duwamish land.” She said, “Being inclusive and welcoming is an assignment the library takes very seriously.” Here were some other quotes from the evening that will stay with me: