Early this morning, tweets from Donald Trump. I saw them on Facebook. 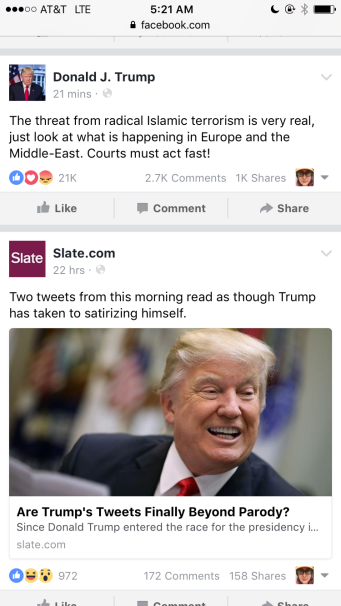 The really satirical-sounding one came just before this one. It said that “haters are going crazy” about him and Putin. I noticed something in the Facebook comments on that one though–some cracks and caveats among his supporters.

Betsy DeVos squeaks through for Secretary of Education with Pence as the tiebreaker. Most senators just catch the clerk’s eye and give a thumb’s up or thumb’s down motion to vote. Al Franken rings out with a loud “No!”

A Lindy West Facebook post imagines “straight cis white Christian men” saying to America, “If I can’t have you, no one will.” Several white male commenters reply in aggrieved confusion. They do not even recognize this language as a reference to abuse, murder, domestic violence.

Department of Homeland Security head James Kelly says to congressional panel that immigration ban roll-out problems are all his fault. He said he should have waited and talked to Congress.

After the DeVos vote at noon EST, the Senate immediately votes to advance Jeff Sessions nomination proceedings. At about 9:00 pm EST, Elizabeth Warren is punished by the majority leader for trying to read Coretta Scott King’s letter about Sessions. It was called impugning a sitting senator. The vote does not pass, and Elizabeth Warren is not allowed to read the letter.

A second black Patriot player has said he will not go to the White House with the rest of the team. Devin McCourty said “I don’t feel accepted in the White House.”

Sean, the list of 78 terrorist attacks that you released, it looked like it had been prepared well in advance. I mean, was that already on hand when President Trump made his comments? Or did you do it afterwards and plan to release it?

Thanks, Sean. On the call with Turkish President Erdogan later today, does President Trump intend to discuss plans for Syrian safe zones? And does the President expect Turkey to help create those zone?

Sean, I have two questions for you. You were mentioning that voters are going to remember how senators voted on the President’s Cabinet nominees. Two Republicans voted against Betsy DeVos — Senators Collins and Murkowski. Did the President reach out to either of them? And will he not forget what Republicans did in that particular nominee situation?

But he never reached out to them?

The second question has to do with the President’s remarks about the Affordable Care Act in his interview on Sunday — because he indicated in his response, in that interview, that he thought that the repeal-and-replace was going to take longer, perhaps into 2018. Can you clarify whether he is frustrated about this, what he is doing about the timing? Because, of course, voters who sent him here were anticipating that this might move faster than he was conveying in the interview.

Thanks, Sean. I wanted to ask — actually, a follow-up related to that. Speaker Ryan has actually said — and I’m quoting — with Obamacare you can’t “tinker at the margins and repair it. You can’t. It is a collapsing law.” Do you agree with that? And you can’t build on what’s already there, you have to get rid of the entire law?

On Iran sanctions, does the President have any concerns about the fact that Adam Szubin is the Acting Treasury Secretary in terms of implementing those sanctions?

Thanks a lot, Sean. As you know, the President spoke over the weekend on Twitter and criticized the federal judge appointed by George W. Bush who imposed the nationwide restraining order. He called him a “so-called judge.” Is the President, as it relates to the arguments — I know you’re confident — but the arguments that will be presented this evening — is he prepared to accept an adverse ruling by the 9th Circuit Court of Appeals?

Will the administration take a position on the Israeli legislation to retract or illegalize the thousands of West Bank settlements? Last week, obviously, you said building the settlements may not be helpful.

Thanks, Sean. Just a quick question. Any response to the calls for impeachment by Representative Maxine Waters?

Thank you, Sean. CNN reportedly declined to interview Kellyanne Conway on Sunday because of the questions about her credibility. Is the White House willing to offer alternative representatives to networks that refuse to work with specific spokespeople?

Thanks, Sean, for the question. Is President Trump planning to ask the Senate to expedite legislation allowing for the swift firing of bad VA employees?

Hey, hi. The President is going to speak later today with the Spanish leader, Mariano Rajoy. And I would like to know how President Trump sees the relation with Spain, and which are the main issues they are going to discuss in their phone call.

Yes, here, sorry. Thank you. It’s kind of loud in here. So it’s a two-part question. One, can you confirm whether or not the White House has accepted the credentials of the new Mexican ambassador, Gerónimo Gutiérrez? And also Representative Mike Rogers, I believe, this morning said that he plans to introduce a bill to impose a 2 percent tax on all remittances that Mexicans send to their country to pay for the wall. Would the President rally behind that bill?

Two questions for you. One, following up on health care, the President, as you know, campaigned for 18 months on replacing the Affordable Care Act. Where is his plan?

The specifics of it, though. I mean, does he owe the American people something now given —

I have a question for you, Sean, though, on Yemen.

I did say two.One of the world’s most wanted terrorists is now taunting President Trump, calling him a “fool” after that raid.

Any response from the White House? And do you still stand by your characterization that it was a successful raid?

So you’re pushing back on reporting that he was a target?

If — and I know that you believe that you have a good case on the merits to lift the temporary restraining order. If the President does not prevail at the 9th Circuit Court of Appeals, will he take this to the Supreme Court?

Can I just finish?

And is he concerned that if this does go to the Supreme Court with its current 4-4 makeup, that this temporary restraining order might become a little more permanent?

I know what it’s about. That’s not the question.

And I get all that, as you pointed it out. But if he does not prevail at the 9th Circuit, will he take this case to the Supreme Court?

Thanks for the question. Does President Trump still plan to immediately terminate President Obama’s executive amnesties?

But just in the thing, it said “immediately terminate.”

So I just wondered what the delay is.

Thank you, Sean. Back to Iran. The Ayatollah Khamenei said today that Trump has “helped Iran reveal the true face of America.” He said Iran doesn’t fear Trump, and he encouraged Iranians to march in the street against America later this week. Does the President have a response to those very aggressive comments? And does he plan to take additional action against Iran if its leaders continue to escalate tensions?

Thank you, Sean. On Thursday, weather permitting, the President is going to meet with airline executives from throughout the country. Two complaints from airline executives, as well as the Pilots Association, have been, one, that Norwegian Airlines got a special advantage, a foreign carrier permit from the Obama administration, and also that the airlines of the Arab Emirates are state-subsidized, and both cases are violations of the Blue Skies Act between the U.S. and the EU. Is this something he’s going to address? And is he considering upending President Obama’s foreign carrier permit?

Thanks, Sean. A few minutes ago you said that the President wanted to remind the American people of how prevalent terrorist attacks are and that the Earth is a dangerous place. That kind of breaks with the rhetoric we’ve seen bipartisan administrations use when it comes to terrorist attacks, encouraging the American people to go about their daily lives.

Does this President have a different message to the American people?

A question on health care. Can I just get my second question?

You just said he’ll negotiate prices, and that’s something he — he ran on negotiating prices for Medicare, drug prices. And I just want you to clarify where he is on that, because when he met with big pharma the other day, before the meeting he said, we have no choice, we have to get prices down. After the meeting he said he would oppose anything that makes it harder for these companies to bring their drugs to market, including price fixing by Medicare. So is he for Medicare negotiating drug prices, or not?

He’s still for it.

Sean, can you clarify two things?

One, Secretary Kerry — Kelly, excuse me, when he was on the Hill today said that the administration right now is not looking at adding other countries to this temporary travel ban list. Is the White House still giving itself room to add some countries to that list?

But I had a second question, sorry. So you said still leaving room to do that. Something that the President continues to say as a phrase — and I’m hoping you can define it for us — is that this is about testing who truly loves America and making sure that those who enter the country are those who truly love America. How do you quantify that? What is the President thinking of? Is that a specific test? What does that mean?

Thank you, Sean. On South Korea, South Korea knows about Trump is very good friend of theirs. And the (inaudible) most important part of his policy on South Korea