Well damn, I forgot all my scribbled notes at the office, so I’ll just have to do the best I can for today and update tomorrow. A lot happens in a day in the life of a blossoming dictatorship.

I woke up at 12 am and lay awake for 90 minutes gnawing on the problem of white feminism, the importance of intersectional feminism, and the distrust that black and brown women feel toward white women. The tendency of white women to act as privileged flibbertigibbets in ways they can’t seem to figure out that they’re doing. The fact that they mean well, have core competencies, and we need their (our) bodies, bulk, voices, and skills in an all hands on deck situation. And we need the leadership, experience, wisdom and moral fiber of women of color who have been living this fight. So, I couldn’t get back to sleep for awhile, just lying there with jangled, stabby feelings. These themes have now flooded my Facebook timeline as the “crowd buzz” has worn off and people have come down to earth and reflected. So it’s circulating.

NPR on the radio alarm, going on about Sean Spicer‘s falsehoods and Kellyanne Conway‘s “alternative facts.” Glad to hear this still being  harped on. Thank you CNN. They still aren’t using the words lie, lying, liar.

A formerly non-political friend texted me this early in the morning:

At a holiday party a few weeks ago, her step-dad said, “You should just give Trump a chance.” She snapped back authoritatively “That guy? No. I don’t have to give that guy a chance.”

I haven’t unfollowed all my Republicans FB friends, though a lot of them have unfollowed me. A lot of them aren’t very political, so stuff doesn’t come up. A lot of them are Native American, and veterans and/or working as first responders. I have respect for them, partly because they aren’t like my white Lord of the Manor college-educated Republican acquaintances, who voted for Hillary because Trump was clownish and crude. Now that Trump’s in, they are perfectly happy to ride it out and get a tax break. A Republican who is a 90-year old retired nurse and clambers around on her own roof taking care of her own gutters, or a Republican who is a single mom who taught her middleschool-aged kids to shoot, clean, and cook squirrels and birds (!!). Well, I admire them a lot.

Anyway, that’s how I get memes like this one in my timeline this morning. Presented without irony.

OK, I’m basically just screwing around now and I need to cook dinner. I’ll be back tomorrow with more details for posterity.

I nabbed some great headlines.

And I read a piece from Venezuelan smart guy Andrés Miguel Rondón: “How to Culture Jam a Populist in Four Easy Steps. He says we (coastal liberal elites like me, who literally cannot stop saying vaguely snooty things) are the enemy of the Trumpists and NOTHING we do or say matters because we are necessary in our role as enemy, and that’s right where they’ll keep us. Overcome tribalism or perish. It did vindicate my sense that every time someone starts reeling off The List: homophobia, xenophobia, misogyny, racism… it is like a block signal for people on the other side to stop paying attention to what we’re saying. The words stop being words, they become just The List now. I am not for cordoning this stuff off as “identity politics” and minimizing it to woo the white working class. No, no, no. I’m just talking about new word formats and speech patterns. Rule one in politics and life: Don’t be litanous. I imagine how I glaze over every time someone says the word “neoliberal” because to me it is a meaningless insult that correlates to a certain purist leftwing worldview that I find deeply exasperating and yet find myself having to partner with because I believe a broad coalition is necessary. Still don’t want to pay close attention after they drop the “N——–L” word though.

Today was also the day of heartbreaking Melania gifs.

And Trump naming the day of his inauguration, a National Day of Patriotic Devotion.

By the way, the Smithsonian winkingly replied to a tweet I made about Donald Trump \ today. They replied with a smiley face and a photograph of a marine worm.

(This next part I am typing from the future, 4/4/2018) Today was the first official White House Press Briefing, if you don’t count Sean Spicer yelling at the press about crowd size and then refusing to ask questions. Nobody seems to have transcribed this briefing anywhere. Here are a list of the reporters’ questions at the briefing (after more then 10 tortured, garbled minutes of Spicer reading a prepared statement):

(Sean says sort of shruggingly that there are no plans for that and then goes on and on about how President Trump is talking to sooooo many world leaders and how everyone is soon excited to talk to him. He mentions President Assisi of Egypt… this seems like a real slap in the face to our foremost ally)

(Sean doesn’t even answer this, is just kind of like yeah yeah whatever and calls on someone else. Amazing!)

I forgot how Sean Spicer RAMBLED for sooooo long, on and on in his answers. What a blowhard. He’s like the least eloquent person who decided to take up the most air space.

Sean looks over at the three women sitting to his right against the wall, Sarah Sanders, Kellyann Conway, and Hope Hicks, and you can hear either Kellyann or Hope saying “They are not public at this time.”

Spicer: I think our relationship with the Hispanic community is gonna be great!

Cordelia Lynch asked this question very flirtily. It was a basically just a permutation of a question asked by crusty old Jon-Christopher Bua earlier in the briefing and Sean Spicer to that guy was basically like “Fuck you and fuck the UK, stop asking me questions.” But to Cordelia, who was inexplicably smiley and full of extra warm micro expressions, Sean Spicer was very twinkly and said, “I think we’ll always have that SPECIAL relationship, but we could ALWAYS be a little bit CLOSER.” (That’s pretty close to the actual wording.) Just interesting, that’s all. 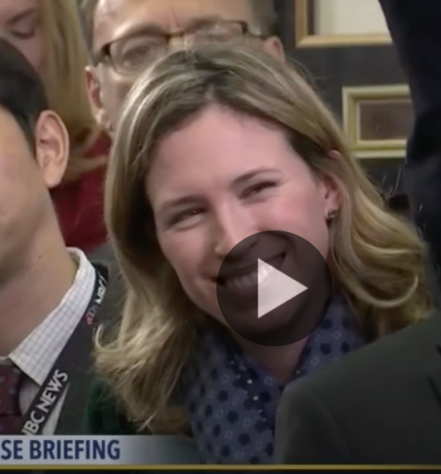 I suppose there could be something to foreign press as a wing of diplomacy. Look at Jane Tang raising her hand next to Cordelia Lynch, getting ready to ask a question in what was also a very warm, very open-faced way. 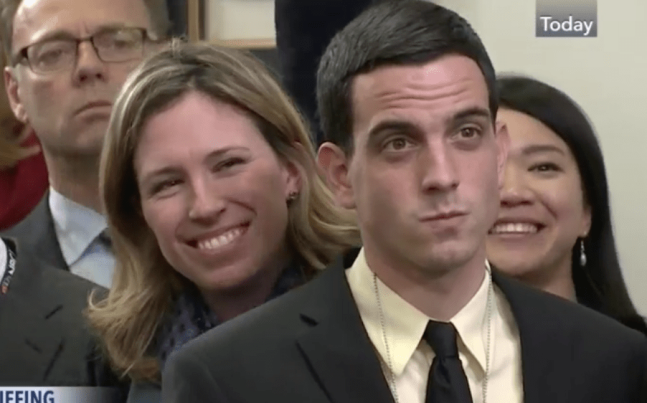 But I don’t know. That’s Richard from Montreal in the back there and he doesn’t ask questions like that (And Trey Yingst in front, taking in all the vibes; see it’s not just me).

Spicer pauses and tells Olivier that he was just handed a note saying none of the front row people at the CIA were Trump people. Olivier responds back, “I said the first three rows.” Spicer sputters.