I’ll change that title later when I am feeling more ashamed of how dorky I am.

I missed my rhythm of weekly reviewing, so started up again at Rob McMonigal’s Panel Patter. It’s a very nice little website to poke around in if you love comics. 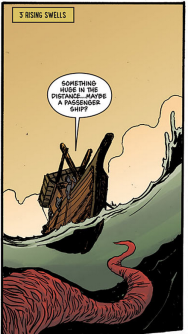 My debut post is a review of Plunder #1 by Swifty Lang and Skuds McKinley, who I just realized both have very pirate-like nicknames. Perhaps they were influenced by their own names to become writers of present-day pirate lore (much as I was influenced by the name Lilith to wander in the desert and become mother to thousands of djinn).

Plunder #1 !! Totally worth checking out!!  Read my review here.